The Gift Of Suffering 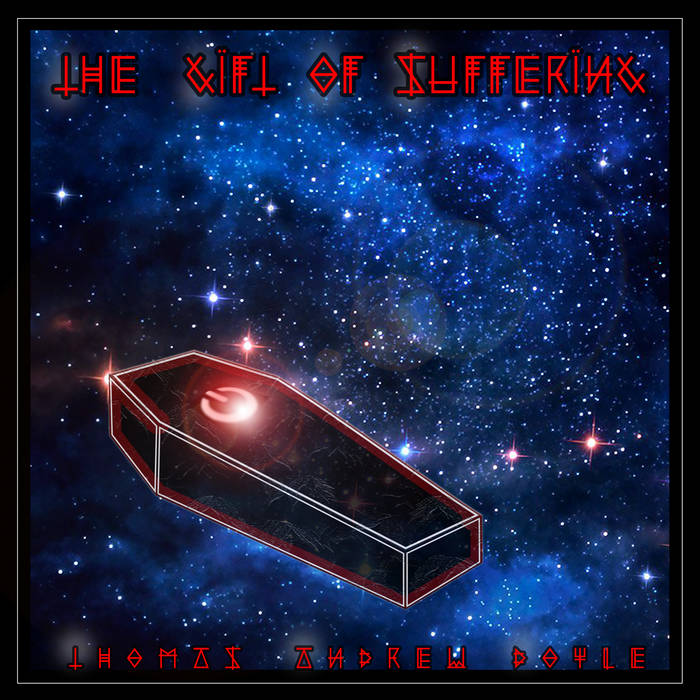 This is the fourth full-length release by musician, composer, producer, Thomas Andrew Doyle aka Tad Doyle. In the words of Doyle, “The Gift Of Suffering is a collection of pieces that I composed over a period of time between May 2017 and September 2020. These works reflect life experiences and spiritual lessons learned and relearned as a result of being a physical manifestation of spirit bound to flesh and bone. In this reality that we share, we all have things that we have suffered over. Some of these were out of our control. Some were self-created as a result of the decisions that we made in our life choices. This work is a story of the human experience from a somewhat nihilistic existence and the conditions that surround it.”

What Doyle has assembled in sonics and subject matter seems to have a theme of, “from birth-to-death”. This, being a journey beginning with birth as a helpless and dependent object that is fully reliant upon a guardian of some sort. As existence progressively moves forward, we often overcompensate for actual human needs that one might feel they have been denied or shorted. A being may rebel against socially accepted norms and will try to grasp and take possession of certain deficiencies that are perceived to exist in the case of one who feels they have been wronged. For example, the first song Gula, derived from Latin, refers to the sin of gluttony. Enter the concept of “a sinner”, which pervades conceptually for the first few tracks. Continuing on with the second song, again, a reference to the Seven Deadly Sins: “Fornicatio”, spirals and weaves together the organ, piano, and choir-like vocals into a menagerie of cacophonous desires and lustful exhibitions. The track evokes feelings of an unnerving insatiable desire for possessions and the supreme manipulations of beings, only to transition to the violently stark spaciousness of “Avaritia” which ends with an ascending progression as if to signify relief from the bondage of ego. “Tristisia” is what seems to be a musically somber aftermath of sorts to the aforementioned songs that lyrically harken questions that one might ask after being brought to thoughtful analysis and understanding of choices made over a lifetime. “Zona Del Theta” is next in the sequence which may be interpreted as a period of healing after the trials and tribulations that we may have been subjected to with the previous pieces. It provides a measured respite in this collection of dreams and nightmares made sounds and textures. Think of “Zona” as a brief healing interval followed by the unsettling “Night Of Seven Tongues”, that comes forth out of the mist as a malevolent nebulous figure of blackened mass that emerges from the cold boundless depths of multi-dimensional space. What follows is a movement of cavernous proportions that could be set by the river Lethe as “Corrupted In Spite Of Grace” continues the journey of mystical malaise. The word “Decay”, uttered in a pervertedly heinous and tortured tone while Doyle sings the same with repetition, accentuates the already disparaged feel. This brings us to the title track, “The Gift Of Suffering”. It begins with distorted and overdriven elements that could be likened to the sound of immense fields of static electricity phasing in and around you, making the hair stand on end as your skin tingles with magnetic push-pulls, creating imbalances to your equilibrium. This is the longest track on the album clocking in at almost nine minutes yet suspending time as you begin to be lost in this sonic mantra. The next to the last track, “Evolved From Death” is surprisingly optimistic in its execution and is reminiscent of a Blade Runner-esque soundscape with elements of Jack Horkheimer’s Star Gazer television show of the late 80’s and a sprinkle of Vangelis. A listener could interpret this track as an afterlife experience to the previous tracks. The last song is a version of the fourth track “Tristisia” and is sung in the dead language of Latin. This version feels different and has an ancient flavor to it because of the vocal delivery. Overall the depth of field in these recordings is fantastic and is only accentuated by Doyle’s mastery of his voice and the musical elements he chooses to paint an image with. In this way, the listener can be involved as a creative participant, not just a witness.

All songs written, composed, arranged, and obsessed by Thomas Andrew Doyle
Recorded, mixed, and mastered at Witch Ape Studio by T. A. Doyle between early 2017 to September 2020
Artwork by T. A. Doyle

All songs Copyright © ℗ 2020 That Which Cannot Be Burned music B.M.I.

Extra special thanks go to my wife and life partner Peggy Doyle without whom this would have only been a dream. I love you, my dear.

Special thanks and acknowledgments:
Baran bo Odar and Jantje Friese - For the inspired writing and directing for the Netflix show DARK (2017-2020) which was a direct inspiration and narrative for the song “The Gift Of Suffering”, performed by Thomas Andrew Doyle

Please go to www.taddoyle.com for a complete biography.

Bandcamp Daily  your guide to the world of Bandcamp